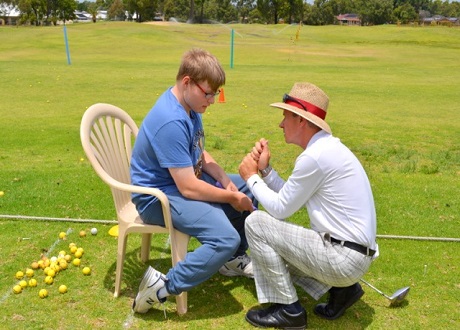 It was a quirk of fate that led Mark Tibbles to become a driving force behind an award-winning golfing programme for disabled children and adults in Western Australia.

In 2010, Tibbles attended a fundraising breakfast that prompted him to consider, during his drive home, just how he could provide a pathway into golf – and the social benefits that provides – for people with special needs.

Little did he know that his answer would come just moments later.

“It was almost as if the planets aligned,” the head golf and teaching professional at The Vines Resort & Country Club said.

“I had been thinking about how I could contribute after the fundraiser and as I pulled into my driveway I received a call from a man called Gary Hart.

“He was the president of the South Australia Amputee and Disabled Golf Association (SAADGA) and he said he had been looking to further develop his programme and had been given a list of names of coaches from WA.

“He said: ‘I took those names and you were drawn out of the hat’.”

It was to prove and inspired piece of luck as Tibbles immediately took up the call for help and, in the ensuing seven years, developed a programme at The Vines worthy of acclaim.

Using the basis of a programme in the United States, Tibbles and Hart laid the foundations for a system that was initially aimed at amputees but has since expanded to provide inclusive opportunities in the game of golf for people with special needs.

In 2015 the programme was recognised with the WA Golf Industry Council’s Outstanding Game Development Award.

The accolade was a fitting reward for a long and difficult road just to get the programme off the ground.

Shortly after the WA Amputee & Disabled Golf Association (WAAGDA) was formed Hart, who was an above the knee amputee, sadly passed away while Tibbles operated it without any funding.

A turning point arrived with funding from the Western Australian Golf Foundation (WAGF), which Tibbles described as “throwing him a lifeline”, and since then the programme has expand with 39 children and six adults participating in 2016.

This year the WAGF and Department of Sport and Recreation are set to jointly fund the programme – which has been rebadged as ‘Ready Steady Golf ‘ – and it is hoped numbers will grow further with classes due to begin at The Vines in early February.

“One of the things that I have noticed in the time that I have been doing this is that each person gets something different out of the classes,” said Tibbles, who last year gained an accreditation for Blind & Disabled Coaching with PGA Australia.

“We have had autistic children come through the programme and they have gone on to become junior members at the club. It’s not just the golf but the social aspect of the game that provides a positive.

“Then at the other end of the spectrum there are some people that are so disabled that they can’t hold on to a golf club, but they are there because it’s something different.

“It’s a breath of fresh air and they can form relationships with other people which might help with their rehabilitation.

“We have had kids that have never played golf, and they probably won’t get on a golf course, but if they can hit a ball then they have that opportunity to go onto a driving range and do that with their family.

“A lot of carers and parents say it’s nice to have a different option and to get their children outside and away from a screen.”

Ready Steady Golf is a four-stage programme where the chief aim is for participants to “learn golf skills in a fun, friendly and supportive environment” with hour-long sessions.

To find out more about the programme, or to enrol, please click on this link or get in contact with Mark on 0413 824 477 or via email at mtigolfacademy@gmail.com.