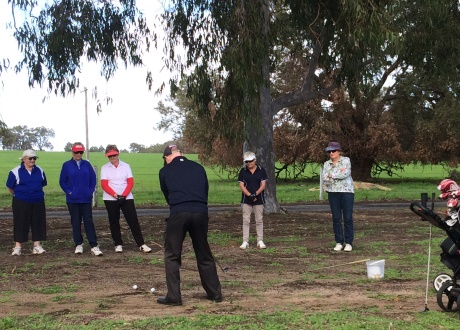 With a stunning coastline, rich expanses of agricultural land and a strong caring community, Gingin has plenty to offer as a town; now golf has become an inviting factor 67km north of Perth.

Through the help of the WA Golf Foundation, Gingin Golf Club is moving from strength-to-strength with its new program initiative of “Giving Golf A Go”, a proposition that is proving more than adequate.

Under the guidance of Rob Farley and direction of Club Junior Coordinator Kerry Fewster, a number of clinics for men, women and children were run to introduce the game to a plethora of beginners.

Farley, a PGA Professional, took skill clinics for people of all ages, with parents and onlookers impressed by his demeanour with students.

“Rob has a fantastic rapport with all who participated in his clinics,” Fewster explained.

“He presented his lessons on different golf shots to people with varying abilities, revolving around the conditions the course was currently in.”

Clinics are run twice a week by Gingin Golf Club and will continue until September, with Farley’s influence in the June/July period vital to the improvement of all players.

“All participants were impressed with Rob Farley’s style of coaching.”

“His visit in July introduced challenges to the children and held competitions. The winners were presented with several different prizes to encourage the youngsters to keep practicing.”

The program also appealed to many parents that had brought their children along to have a go, opening up the opportunity of playing at the golf club.

“We even had parents showing an interest in picking up the club and giving it a go,” she said.

“Hopefully we can get a few more golfers out of the initiative.”

These types of programs wouldn’t be possible without the continued support of the WA Golf Foundation, giving towns like Gingin a helping hand to get people into the “Game for Life”.

“The Foundation is important not only to our club but to all clubs in the Ladies Avon Valley Golf Association,” she noted.

“The funding is greatly appreciated, delivering coaching clinics in the country and providing opportunities for adults and children to learn.”

“These improvements should encourage more people to play the game and want to better their golfing skills.”