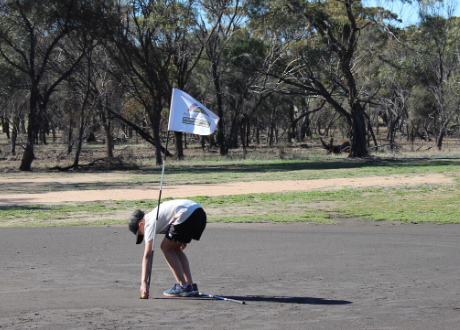 10-months on from the tournament and the club is continuing to see the positive influence that the event has had on their community.

Narembeen GC President, Greg Vaughan is incredibly proud of what his club has achieved in the past year and he is also excited for what the future holds.

“We are in the middle of some clubhouse renovations using the profits we grossed from hosting the Sands last year,” Greg said.

“We wanted to make sure we had something to show for our hard work and it’s probably the first time the clubhouse has had significant work done on it since the 70s.”

The interior of the clubhouse has received a fresh lick of paint and the floor tiles at the bar have been given a new lease on life. Additional storage rooms have been constructed at the back of the club and these will be used to house game development equipment.

Already blessed with amazing views across the golf course, these interior updates make the clubhouse a fantastic spot to relax and engage after a round of golf.

The Aglime Sand Greens not only injected a cash stimulus into the golf club, but it has also raised the profile of golf within the wider community.

Speaking about the new members the club has gained, Greg Vaughan noted: “Sands was such a big event that a lot of the younger guys came out here and they saw us having a ball and they decided they want some of this.”

Covid-19 has also played a part in bringing new golfers into the club. With the local football, netball and hockey seasons delayed, Narembeen GC has seen an influx of younger golfers keen to have a hit.

With so many new golfers at the club and some old golfers who could do with a few tips, Narembeen GC organised former Wheatbelt local and PGA coach Brayden McCubbing to conduct a weekend of lessons.

Speaking after the clinics, Brayden said “We had heaps of young footy players and netballers wanting lessons. The popularity of golf is booming out here. Hopefully, by me coming out here is a little thing that gets them starting in the right direction.”

24 locals signed up for lessons across two days of coaching and Brayden handed out many tips and tricks. Access to quality coaching is something that city golfers take for granted.

“Mitch Miolini hit me up as we went to school together and he just asked if I was available to do some coaching. It was really just great timing because no other courses were ready as they were still figuring out their seasons, so I came out while I still had a bit of spare time.”

“Everybody that comes out here is so appreciative and so happy for the experience of a coach coming out.”

The golfing boom at Narembeen GC is testament to what can be achieved with a little out of the box thinking and a lot of hard work by the club administration and members.