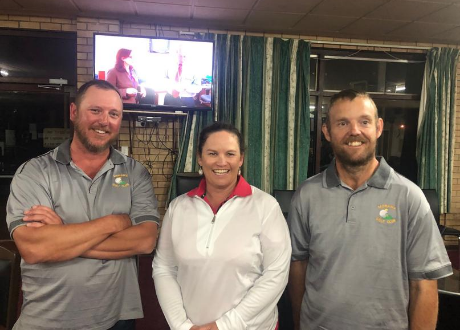 The VDLGA district championship was postponed earlier this year due to COVID-19 restrictions and due to the condensed nature of the 2020 golf calendar, the decision was later made to cancel the event entirely.

The VDGA Committee made the decision to reschedule their championship and saw an opportunity to ask the VDLGA if they would like to run their championship at the same time. Despite not having a single female golfer at their club, Morawa Golf Club was open to the idea of hosting both the men’s and women’s championships.

The combined VDGA/VDLGA championships kicked off on Friday with a mixed 4BBB event that saw over 70 players descend on Morawa Golf Club. This marked the first time the club had been opened in several months due to COVID-19 shutdowns and served as a baptism of fire for the combined championships.

Both associations were formed back in the 1930s and are steeped in history and are proud of their traditions. Friday’s 4BBB was such a success that many members and players called for the event to be jointly hosted from now on.

Ben Chappel (Morawa President), Brett Atkinson (Morawa Captain) and Kylie Tremlett (Latham President) ran a wonderful event that had everyone wanting to come back for more.

Rod Tremlett is a life member and delegate of the VDGA and after the event, he described it as “the best run event I’ve seen in the last 40 years.”

The only hitch of the weekend was GolfWA’s favourite employee, Chook Fowler having a few IT issues when his laptop went up in smoke. Even this was not enough to derail the event, and everyone worked past this hiccup to finish an event that will not soon be forgotten.

Speaking after the event, Chook said, “the winners for the weekend were golf, common sense and teamwork.”

Regional golfers and golf clubs have a wonderful way of dealing with adversity and getting the job done. The combined 2020 VDGA and VDLGA exemplify this spirit of positivity that just may change the way golf is run in this region for years to come.