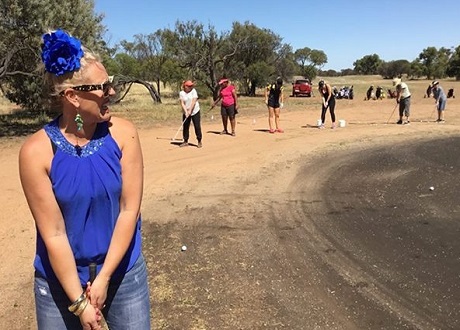 “We needed new members. We needed to find a hook that would bring in fresh faces to our club.”

It is an all too familiar refrain for many sporting clubs, let alone golf clubs, around the country as the luxuries of home life and other modern-day allures have made it increasingly more difficult to prise people away from their screens and into sporting endeavours.

For Bruce Rock Golf Club – situated about 245 kilometres east of Perth in WA’s Central Wheatbelt – the dilemma isn’t so much getting people to play sport, but getting them to choose golf in a crowded local sporting landscape.

Ask a Bruce Rock resident and Saturdays are, like many other towns in the region, a day for sport. Everything else stops, even in harvesting season.

The Shire of Bruce Rock has a population of around 1,100 people, in a vast area that is approximately the same size as the European country of Luxembourg, but is fully catered for in sporting terms.

Indeed, there are even two golf clubs in the Shire with nearby Ardath, situated about 15kms away from the town of Bruce Rock, also boasting its own course.

With locals mob-handed for sporting choice finding that ‘hook’ to get them to play golf was the nagging question for Secretary Nat Kilminster and the Executive Committee at Bruce Rock Golf Club.

Their response was to draft an action plan that focused on the most honest of questions – most significantly: ‘Why did people feel like they couldn’t take up the game?’

“As all clubs the Bruce Rock Golf Club is always trying to think of new ways we can make our club a bigger and better place to service and welcome our local community,” Kilminster said.

“We knew there were a lot of young people in our town that weren’t playing golf due to many reasons.”

The club identified six areas to target to make the game more accessible to its community.

The points ranged from people not feeling as though they had the skills, to new players believing they would not be welcomed to play or simply having never considered the sport.

A lack of equipment and childcare at weekends were other fundamental problems that were discovered.

“All of these reasons were ones we were determined we could help with and overcome,” Kilminster said.

“This would result in higher membership numbers, a more diverse age bracket of playing members and hopefully get kids back to hanging around golf courses again.

“I am a believer that if you spend enough time at a sporting club it’s only a matter of time until you give it a try yourself!”

That set the wheels in motion for the next stage of the plan which, after a brainstorming session on the 19th, included ringing clubs with high memberships to understand their blueprints for success.

The research resulted in the formation of the ‘Golfing Greenhorns’ – a group aimed at bringing together beginners (or ‘golfing gumbies’ as they have since grown to refer to themselves) to learn the game in a relaxed environment.

“We figured this would help them feel more confident at giving golf a go and demonstrate to the local and broader community that we are a welcoming club that loves new members of all abilities,” Kilminster added.

Turning the idea into reality, however, required money and an application was made to the Western Australia Golf Foundation proved the key moment in allowing Bruce Rock GC to turn its research into practice.

“The funding allowed us bring up a professional coach from Perth to teach our beginners the basics in an easy, fun, non-judgemental and low-stress environment where equipment was provided,” Kilminster said.

“The grant proposal also covered the club to purchase three new sets of golf sticks, bags and buggies for beginners to use until they had the resources and desire to purchase their own.

Crucially the funding helped Bruce Rock meet five of the six points they had identified in making the game more accessible to locals – with only the issue of childcare remaining.

“As all other expenses had been relieved from the club through the WA Golf Foundation funding, the Bruce Rock Golf Clubs’ Executive Committee moved at the last meeting that each playing member in need of a crèche should only pay $10 per child, per day and the club would cover the rest of the expense incurred through running a crèche,” Kilminster said.

With the financials in place the club began to reach out to the community via an advertising campaign that leaned heavily on developing a Bruce Rock Golf Club Facebook page.

“This allowed us a greater reach to potential golfers that we wouldn’t have otherwise had,” Kilminster said.

“It is instantaneous, repetitive, interactive, direct and an extremely effective communication channel that targets the younger generation.

“We worked hard at keeping the page active and generating hits. It was slow at first and then interest picked up as more clubs and individuals friended and started following us.

“Before we knew it we had over 20 expressions of interest in becoming a ‘Golfing Greenhorn’ from Narembeen, Corrigin, Bruce Rock, Ardath and Quairading.”

The culmination of the hard work arrived on April 2 – on a Sunday! – when Bruce Rock Golf Club staged its first coaching clinic for the ‘Golfing Greenhorns’ under the guidance of Donna Crouch from Maylands Pennisula Golf Course in Perth.

The clinic welcomed 14 people, ranging in age from 19 to 53, with some making the 150km round-trip from Quairading to be there.

It proved an instant hit.

After an initial clinic in the morning that involved “the very basics of holding a stick, to driving, fairway hitting and chipping” the Greenhorns were treated to morning tea before heading out on the course with Crouch for four holes.

“Amongst the windies, miss-hits and falling-on-the-ground laughter there were so many great ‘moments’ of play and a lot of golfing potential shown,” Kilminster said.

“Our Greenhorns were very proud of themselves and what they achieved.

“Although some were due to leave at 12, it was 5pm before they left and couldn’t believe how much they’d all enjoyed themselves.

“All commented on how wonderful it was to have Donna there coaching and can’t wait to play again.”

Further players have already enquired about future clinics and the Golfing Greenhorns have begun the process to obtain further funding for another workshop in June.

The momentum of the first clinic will not be lost until then, however, with new Community Coaches (as initiated by the WA Golf Foundation) set to support the Greenhorns on a weekly basis.

“(That will) ensure their new-found love of golf is nurtured and continues to grow so we can become one of those thriving clubs we initially called,” Kilminster said.

“We will strive to keep meeting the needs of our new and existing golfers both locally and in the greater Wheatbelt region.

“Our Ladies Day competition commenced last Wednesday and in an effort to accommodate our new golfers, our Captain decided it would be a nine-hole Ambrose competition with a sparkling high tea to finish.

“It’s looking to be a great golfing season ahead at the Bruce Rock Golf Club.”